No matter how many years removed I am as “Director of Communications” for the San Francisco Giants (I left in 1994 after 10 seasons), I’m still known in many PR and media circles as “Robin from the Giants.”

Now, as a Senior PR Counselor at LCI, I’ve had the privilege of working with Becoming Independent or BI. The Santa Rosa-based non-profit community benefit organization helps adults with developmental disabilities live meaningful and productive lives. Two of their clients (“participants”) are Mauricio and Austin.  Mauricio is thriving in BI’s “Passport to Independence” program, which helped him discover his passion for becoming a sports broadcaster.  As a result, he now gets to broadcast almost daily from his own YouTube channel. Austin, Mauricio’s friend and also a BI client, has also identified a number of goals he wants to work on. Many of them are related to improving both his speech AND his media skills.

Upon learning that Mauricio publishes his own sports talk show – which happens to be filmed and uploaded at Becoming Independent – Austin showed a huge interest. It soon became very clear that Austin has a strong penchant for remembering scores, schedules, trades and everything else that’s typically discussed on sports talk shows.

After Austin recently joined Mauricio on his show, it became obvious that the two had special chemistry. Now, the duo regularly recaps games together, updating viewers on the latest winners and losers. “Doing this YouTube channel with Mauricio changed my life, and I want to say thank you for that,” he said. 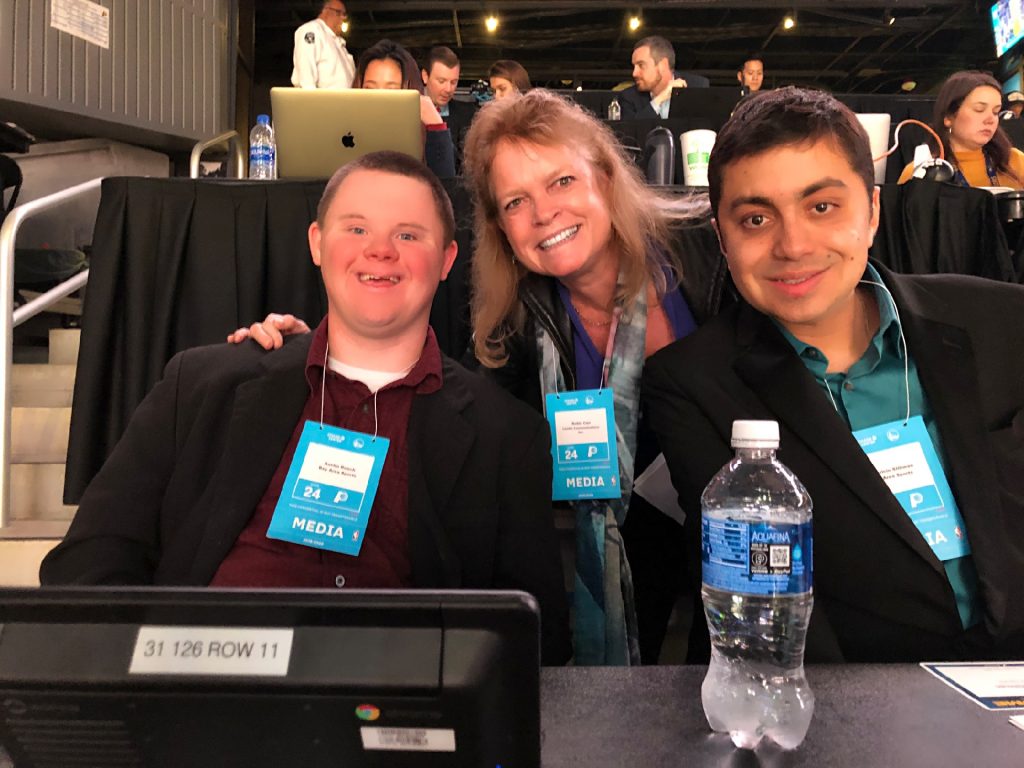 This is where “Robin from the Giants” still holds traction. I never lost my sports connections – from sportswriters to broadcasters to comrades working for sports team PR departments. Mauricio and Austin’s story resonated with me, so I wanted to do something special for them. How about getting them sports credentials to cover a game, sitting shoulder-to-shoulder with other sports media for the pre-game interviews, media dinner – and even have a desk in the press box? They could be real-life sports reporters for a day!

I reached out to the Golden State Warriors’ PR department to see if they could host Mauricio and Austin at an upcoming home game. I wanted to get them a press pass so they could simply cover the game – not necessarily meet any players or coaches. Since I’d worked in the Giants press box for 10 years, I offered to assist with escorting them around. Would that be possible?

The Warriors wrote me back within five minutes to say that they would love to credential and host Mauricio and Austin on Jan. 24 for the Warriors-Pacers game at Chase Center!

Not only did they credential Mauricio and Austin, but they provided a behind-the-scenes tour of Chase Center. The two also got to dine with fellow sports reporters in the media dining room, they sat courtside for the pre-game shootaround and they attended the pre-game media briefing with Coach Steve Kerr.    They also came prepared with a question:  “Soooo,” said Mauricio, after the PR attendant handed him the microphone, “When are Steph and Klay coming back?”

Kerr shared that Klay Thompson’s surgically repaired left knee would be reevaluated “at the All-Star break” around Feb. 18. And the status of star guard Steph Curry would be updated on Feb. 1. “We’ll see how it goes,” the coach concluded. 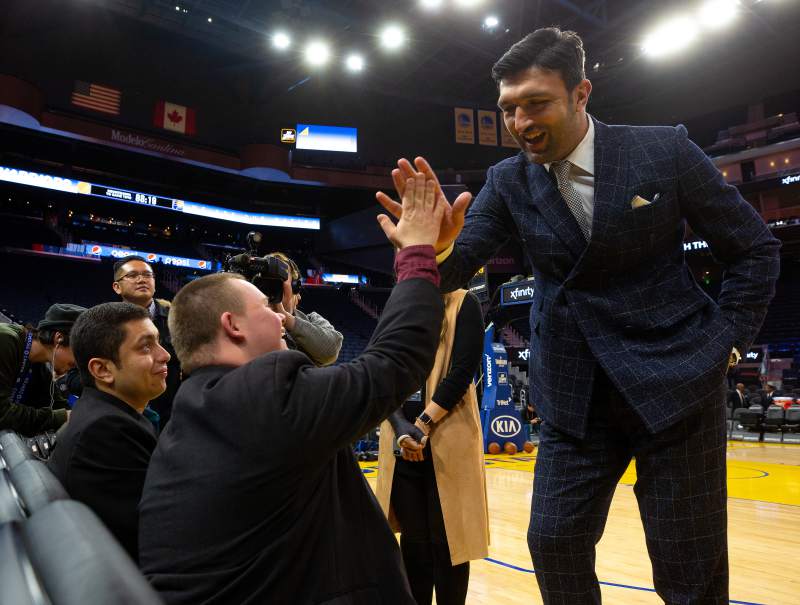 A terrific sidebar to all of this is that I pitched Austin Murphy, a Santa Rosa Press Democrat reporter, to consider introducing this dynamic duo to readers. Austin had previously worked for Sports Illustrated for 33 years before a mandatory corporate downsizing in 2017 forced him to switch “careers” by becoming an Amazon.com delivery truck driver. He later wrote an article for The Atlantic, I Used to Write for Sports Illustrated. Now I Deliver Packages for Amazon, which went viral.

Murphy was then hired as a general reporter for the Press Democrat and I thought he’d be the perfect person to tell their story. You can read all about Mauricio and Austin’s special night in this front page story, Pursuing their passion: hopeful Santa Rosa sportscasters get VIP treatment at Warriors game. A KPIX Channel 5 (CBS affiliate) story is also in the works.