Can we have a moment, maybe two?
Two Facebook updates you need to know about 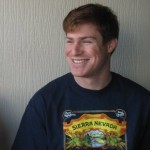 By Nick Singer
Facebook Moments is six months old and has now become one of the most downloaded photo apps for the iPhone.

The main features of Moments are: 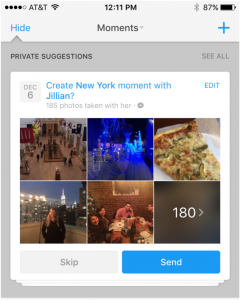 Do I think Moments will take over the way we share photos now? Probably not, unless it’s forcefully integrated into the mobile app. The question that Facebook has to answer is: why would a user go out of their way to download another app when they can already post photos on their own Facebook? I don’t think that question has been answered, and with apps like Snapchat and Instagram already dominating the medium of instant “moments”, Facebook is playing catch up.
Facebook launches its own version of Twitter’s Moments, but just for sports
Facebook has launched Sports Stadium, a competitor to Twitter’s Moments but specifically aimed at sports. Stadium is part of the larger Facebook platform, but won’t have its own button. Instead, it is integrated so that users can get to Stadium just by searching for a game they’re interested in.

The four tabs featured on Stadium are:

The launch is tied to this weekend’s NFL Conference Championships, as well as Super Bowl 50, and is expected to expand to basketball, soccer and even more sports down the road.
Stadium is a fantastic answer to Twitter’s Moments when it comes to sports coverage. Personally, if I am trying to follow a game in real-time I go to Twitter and keep refreshing or wait for ESPN updates (I know…I am a Neanderthal when it comes to instant sporting news). Twitter Moments is still new and clunky, so for Facebook to come out now with Stadium (with the biggest sporting event in the U.S. coming up) is amazing timing on their part, plus it offers any sports fan what they want – getting to see stats, friends, and experts all in the same place.
Let me know what you think about Facebook’s latest updates in the comment section below or tweet me @nicksinger91.

7 thoughts on “Can we have a moment, maybe two?”