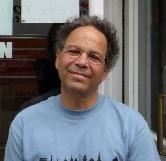 Questions or comments for Ben? Leave a comment below or send an email to [email protected].

10 thoughts on “Meet the Media with Ben Marks, Senior Editor of Collectors Weekly”