I recently returned from Japan, where I traveled to attend the fall meeting of the Public Relations Global Network. PRGN marked its 25th anniversary at this conference. This was an especially meaningful milestone to me, as we – along with HMA Public Relations, The Fearey Group and Stevens Strategic Communications – are a founding member of this independent, invitation-only network of PR firms all around the world. 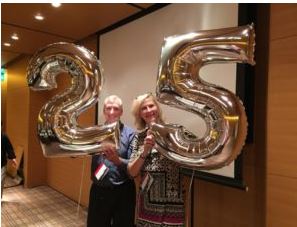 This trip reminded me of how informative and educational global travel can be. As communications professionals, we are increasingly called upon to reach audiences outside of our own markets.

We began our trip in Tokyo, the largest city in the world, for two days of sight-seeing before heading to Kyoto for the meeting. With a population of 38 million, Japan’s capital is nearly double the size of New York City.

But it was not its size that distinguished Tokyo for me. Rather, it was its unique culture.

Japan is a far more reserved and quiet country than the U.S. Most Japanese I encountered struck me as more contained and “internal” than a typical American. Despite seeing many Japanese using cell phones, I only once witnessed one actually talking on her phone. Subway trips are nearly silent, save for the clacking of the tracks and the announcements of upcoming stops.

Japanese are very polite and helpful if you ask for assistance, but by and large, do not proactively engage. The one exception was the older gentleman who spotted us pondering a train and subway map and walked us nearly a quarter-mile to the train station. He had traveled extensively in the U.S. and chatted amiably as we walked alongside him.

Much has been written about the Japanese work ethic, including this front-page article in the Wall Street Journal. During the morning rush hour, I was struck by the wave of nearly identically dressed workers (black suit, black tie, white shirt) who swarmed past us on their way to the office.

The city itself was pristine. No evidence of garbage or a homeless population anywhere that I could see. Though surprisingly, we had to relocate or leave two restaurants, because of cigarette smoke; non-smoking does not seem to have arrived in Japan yet.

And the technology! The Japanese excel at trains and toilets. We took the fabled shinkansen – the bullet train – from Tokyo to Kyoto. Traveling at 200 mph makes it hard to take in much more than a blur of the countryside, which became more and more lush the closer we got to Kyoto.

A Japanese toilet can forever change how one looks at a bathroom. In Japan, it is customary – even in public bathrooms – for the seats to be heated. There are frequently buttons to turn on a sound-masking white noise, emit a fragrance, and access a jet stream of cleansing options. In fact, the panel of options was sometimes so sophisticated that I struggled to figure out how to flush the toilet.

The number of beautiful sites – shrines, temples, gardens and kimonos – was staggering. The emphasis on calm and beauty seems paradoxical to the sometimes-lethal emphasis on hard work.

When our contingent of PR professionals gathered in Kyoto for our formal meeting, the talk turned to the state of our industry around the world. Although we work in different countries with different cultures and customs, there are some common challenges to running a PR firm that are shared around the world: 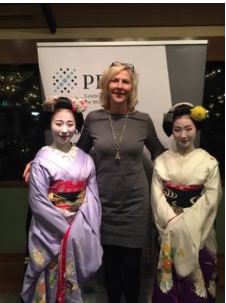 One of our more energetic discussions was around the terminology we use to describe what we do. Does the term public relations still apply? Should we consider adopting the broader communications to explain ourselves? How does digital figure into the way we serve our clients and market ourselves?

We decided to remain the Public Relations Global Network for now. But it’s an issue we’ll be watching closely.

I’m grateful to have 50 close friends around the world who share the same passion for advancing our profession and helping our clients grow. And I’m thankful for the opportunity to learn about PR and life in other countries.

Have you been to another country for a business trip and noticed differences in work ethic or demeanor?  Tell us about it by tweeting us at @LandisComm or by commenting below.

5 thoughts on “How does Traveling Benefit You?”