It’s going to be more like top story of the year, but retail closures will be a significant part of my beat for the rest of 2017. The industry is being slammed by a perfect storm of demographic changes, major shifts in shopping habits and — especially in the Bay Area — the increasing cost of doing business. Expect to see a lot of retailers scale back on brick-and-mortar expansions, weed out the under-performing stores they still have open, and shrink their inventory to become more efficient.

That would be anything that acts more like a vacation than an assignment. Just kidding (sort of). I love stories that start with a person, but shine light on a bigger trend. Everything starts with a single idea, so the best assignments are focused on figuring out how someone came up with it, but more importantly, what they’re doing to keep it alive and relevant.

I was covering the real estate industry while I was living in Texas, and there was an industrial development I was writing about that was set to break ground in one of San Antonio’s suburbs. As I was digging around for more context, I found out that the developer had been charged with bribery, had spent time in and out of jail, and was now attempting to get back in the city’s good graces with a multi-million-dollar investment. There is no graceful way to ask someone why they had to spend time in the pokey.

Business reporting is very different from the typical daily, but the bulk of the PR pitches I get never acknowledge that. When my inbox is stuffed with emails about a restaurant’s menu change, a retail store hosting a special event, or a hotel announcing a special discount, all of that work and time in getting that pitch put together has been wasted. The best ones I get focus on the numbers — percentage of growth, number of new locations, value of investment, etc. — and cater to the businesses that make up the bulk of the San Francisco Business Times’ readership.

Retail closures, as I explained above, will be the biggest issue for my beat right now, but what I’ll be focusing on is how the industry will be responding after those closures. What will happen to the storefront space, how will it impact rental rates, which companies will flourish amid these changes, and how will e-commerce play a role in all of these decisions? A source of mine recently told me that it won’t be a retail apocalypse, rather, the industry is simply going through a dramatic paradigm shift. He’s absolutely right, and as consumers, we’ll all play a role in which direction that shift ultimately takes.

What are the main differences between the media markets in San Antonio and San Francisco? 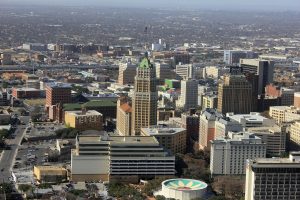 It would almost be easier to focus on what’s similar, since the two markets are different on almost every level. The most pronounced difference, however, is that San Francisco places a high value on having a varied pool of media outlets. There are respected blogs, community papers, regional publications, niche publications, newsletters, daily papers … the list goes on, and as a reporter, that is an ideal situation. The same can’t be said for San Antonio, since there were only four sources — including the San Antonio Business Journal — where people got their news. For the seventh-largest city in the country, that’s unfortunate.

I am not one to turn down a new adventure, opportunity or challenge, and rarely regret that willingness to try anything. Now that I’m back in the Bay Area — I was born in San Francisco, grew up in Marin, lived in the city after graduating from the University of Washington, and now live in Berkeley — I’m excited to get back into sailing (Texas beaches have brown water, so there was no way I was going to take a boat out in that), and have a chance to watch my nine-year-old brother grow up. I’m the sort of person that would rather pick up a book than turn on the television, and right now, my life is consumed by figuring out how to unpack things from my former 700-square-foot apartment into my now 320-square-foot one.

In the end, though, there is too much going on around the Bay Area to stress about how expensive it is to permanently occupy a small part of it. I’m excited to be back, and am diving right into how the city continues to evolve, change and grow.