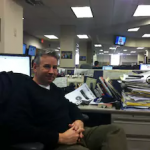 Besides the story on Alzheimer’s that an LCI call triggered, I recently finished a two-month project called “No Justice,” about a guy, Lamonte McIntyre, who was wrongly accused of double murder and was given two life sentences when he was 17. He was wrongly arrested, wrongly convicted based on what was likely false and coerced testimony, and has spent the last 22 years in prison. The question now, after the series, is if he will get a new trial or hearing and finally be released. I’m also working on several stories related to stated proposals made by President-elect Donald Trump in the run-up to his inauguration. The president-elect, as every journalist knows, is sure to offer a bottomless supply of stories.

That’s way too personal and intimate a question. I’ll say this: I love any story that brings me into new worlds, with new people or ideas. I’ve been doing this a long time and have literally written thousands of stories. Here’s, hopefully, what one learns: Pretty much every story can be a dream story if you possess enough true and genuine interest and probe deep enough. That’s the key phrase, genuine interest. As everyone on a bad date knows, false or feigned interest gets you nowhere. People often say about their crazy, daring, tragic, heroic, complicated lives, “Man, I could write a book!” And they’re right. If they could, they should. It’s my operating belief is that there exists in every life all the material of great literature – desires, wants, loves lost, loves possessed, dreams achieved, dreams striven for and dashed. You just have to know it’s there and be interested enough to ask and, most important, listen.

So, a dream assignment? There is none. People with dull minds write dull stories. People who find the world interesting write interesting stories. You find the dream inside the assignment: a vet trying to walk on new legs; Syrian refugees stepping haltingly into a new life; a kid on his first date aching to impress at prom. It doesn’t matter. It’s all about the people, what they’re doing and your level of genuine interest.

Can I change wackiest to dumbest? No joke: I was once pulled off of an actual important assignment to write a story about an area guy who had invented plastic dog testicles to implant in dogs that had been neutered to save their canine self-esteem. Seriously, plastic dog balls. They’re called neuticles. Look it up. The guy was actually interesting and, as far as I know, is still at it.

Let me start with the PR people I love. They’re those who “get it.” That means they know that this is a business that moves fast. They know their issues, their people, and they know that when the machine is churning, they use all their energy to set up interviews, get folks on the phone, set up access, and will talk off the record or on background to give a reporter perspective they might need or be unaware of. Of course, all of that comes down to trust. That’s not always easy to build. That segues into my two pet peeves:

1) PR people don’t know their clients or the information they purport to know. That can even be OK, if they stay out of the way of an interview or process.

2) Obstructionist PR people who get in the way.  Listen, I get that, at times, it’s a good PR person’s job to protect their clients from doing or saying something stupid. But unless your client is in crisis mode – poisoning people with their new drug, bodies buried in the basement, malfeasance – the great mass of interviews are just that: interviews. They’re organic. Let them flow. They’re conservations. It’s often, in discussing nuances, especially around complicated issues, that sources and reporters come to understand one another. For that reason, it drives me nuts when PR people ask for an email detailing exactly what the story is going to be about and whether I can type out 5 questions that the source can answer. I know it helps you all to maintain control. But stories that come from that kind of interviewing generally are pretty lousy and shallow.

None. I’m an enterprise reporter. I generally write about what I want and cover large breaking news stories – whether it’s the KC Royals in the World Series, or the Joplin Tornado, or do news features off the news, like the recent Alzheimer’s piece. I go where my interest takes me.

Born in Montclair, N.J. Graduating with honors from Rutgers University as a physiology and zoology major with a focus on molecular genetics. I drove an ambulance and thought I’d become a researcher, until I actually did research for three years out of college at a major pharmaceutical firm. It was so dull, I wanted to blast my brains out. I instead read tons of Russian and English novels while watching test tubes shake and thought, hmm, maybe I should try writing.

I graduated from Columbia University Graduate School of Journalism in N.Y., and came out to Kansas City for The Kansas City Star as its science writer. I thought I’d be here 2 years. That was 30 years ago. You fall in love with people, with places. Life has its own path. I went to MIT as a Knight Science Fellow, studied playwriting, wrote plays, came back to KC and became a feature reporter and later enterprise reporter, pretty much writing big, long stories about whatever I wanted. That has changed as the business has changed and staffs have tightened. Now I write what I want 75 to 80 percent of the time, cover big regional stories, and do little stuff to feed the Twitter and social media monster. I’ve got a boy, a ripping blues and rock guitarist, now at Tulane.