(LCI is celebrating its 30th anniversary (#LCI30) with a look back at some of the firm’s most memorable campaigns as chosen by the staff. This week’s spotlight is on Native Trails and Old Navy.)

As a 20+ year veteran here at LCI I’ve worked on a slew of campaigns…but these two really stand out.

We all know Old Navy as the ubiquitous neighborhood clothing store for the whole family. But there was a time when Old Navy’s flag t-shirts weren’t as popular as they are now. LCI was charged with helping the brand associate 4th of July with their collectible $5 tee. 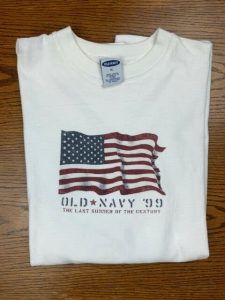 Cut to me in a white rental van with an actress dressed as Betsy Ross, a few giant “I’ve won the lottery -sized” cardboard checks, 2 local interns and stacks of t-shirts on the backroads of Marietta, Georgia.

How did I get there? Our campaign was truly grassroots. In multiple markets throughout the US, on Flag Day (June 14) teams of Betsy’s, interns and stacks of shirts visited local libraries to host a story-time and give free shirts to any child that signed up for the summer reading program. We threw in a donation (hence the giant checks) to the local libraries to fund additional summer reading program needs.

The program was a hit, combining Old Navy’s family-friendly brand with flags and Fourth of July and a good corporate social responsibility program to boot. And I got to eat seriously great Southern BBQ somewhere in Georgia.

Native Trails is a family-owned eco-chic kitchen and bath furniture design and manufacturing company in the sleepy town of San Luis Obispo, Calif. They wanted to raise their profile with interior designers and everyone who thinks they’re one (c’mon, you know you judge HGTV nightly). Budgets limited paid placements on broadcast, but then we decided to explore our neighbors to the North – HGTV Canada.

Canada, in its infinite wisdom, provides funding for TV and film production, effectively making cities like Toronto and Vancouver the backgrounds for many of the shows we enjoy (pro tip – most of the time when you see San Francisco’s Chinatown on a TV show, it’s really Vancouver, British Columbia). Property Brothers (at that time) was produced by a company called Cineflix out of Toronto, and unlike their neighbors to the South, Canadian productions didn’t demand giant product placement fees. In fact, we provided product (beautiful product) in exchange for placement, credits, links on the Property Brothers website, etc.

We placed Native Trails’ products on over 7 seasons of Property Brothers, and even branched out to other shows like Masters of Flip and Restored by the Fords. The campaigns were so successful that buyers routinely walked into showrooms asking for “the bathtub on Property Brothers.” Coordinated sales tools like counter cards and HGTV personality appearances in the Native Trails booth at major trade shows extended the partnership beyond the TV screen and helped Native Trails achieve record sales goals.