(LCI is celebrating its 30th anniversary (#LCI30) with a look back at some of the firm’s most memorable campaigns as chosen by the staff. This week’s spotlight is on “in San Francisco” campaign.)

*Cue Tony Bennett and his famous love song to the City by the Bay.*

To say you’ve left your heart in San Francisco achieved true meaning with the launch of the “Hearts in San Francisco” project in 2004. LCI spearheaded the year-long, heartfelt campaign which featured the installation of 130, 5-foot tall, artist-commissioned and celebrity-created hearts across the City.

Hearts began popping up all over the San Francisco Bay Area as part of a fundraising effort for San Francisco General Hospital. Media interest in the campaign was tremendous, garnering a wide range of coverage from all local press as well as national stories from such outlets as Associated Press, Reuters, Los Angeles Times, The New York Times and many others. In addition, the LCI team secured a regular column for six months in the San Francisco Chronicle’s Datebook called “Heart Monitor,” which featured the story behind a particular heart.

Long before selfies and Instagram, the hearts attracted many photographers. I’ll never forget seeing the first one in Union Square – and how it, well, captured my heart. Charles Zukow and Associates still manages the campaign some 16 years later. (Can you believe that the hearts achieved “top West Coast tourist attraction” honors in 2004, as well?)

Fast-forward to 2020 when, even during this challenging year, it was comforting to have Tony Bennett revive his signature tune last spring to help lift our spirits and our hearts once again. 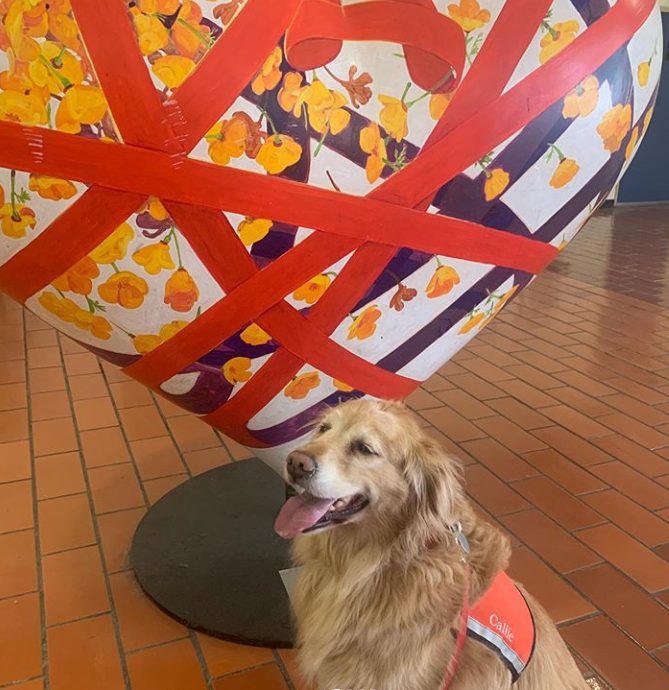 Leigh Anne’s Golden Retriever, Callie, is a certified therapy dog with the SFSPCA. She loves posing for pictures beside her favorite hearts – this one is in the lobby of Zuckerberg San Francisco General Hospital.