Joan Ryan is an award-winning journalist and author of five books, the latest of which is Intangibles: Unlocking the Science and Soul of Team Chemistry (Little, Brown, 2020). A pioneer in sports journalism, Joan was one of the first female sports columnists in the country, writing for the Orlando Sentinel and San Francisco Chronicle. She was born in the Bronx, grew up in New Jersey, went to high school and college in Florida and ultimately ended up in her favorite city: San Francisco.

Because of my most recent book about team chemistry, I’m noticing stories about how profoundly we human beings physiologically affect one another. There was a front-page story in The New York Times recently about fairly healthy elderly people in assisted living facilities dying from the scourge of isolation. We need physical connection with other people to survive, and certainly to thrive.

Intelligence. Curiosity. Humor. Unpredictability. I want real people doing things and thinking things that make me see the world just a little bit different. Tell me and show me something I don’t know.

Probably War Without End, a three-part series in the SF Chronicle that I wrote in 2006. It follows two young soldiers from the same Army company who, within four days of each other, lost both legs to IEDs in Iraq. I immersed myself in their lives on and off for a year – one in rural eastern Washington, the other in Tucson, Ariz. I watched them struggle not only to recover psychologically, socially and physically, but to figure out who they were now: “He sounded as if he were talking about a character he was creating, and maybe that’s what he was doing: shaping himself, through words, into the man he wanted to be.” Their stories haunt and inspire me still.

It would be to travel the world studying what happiness looks like in different cultures.

…Hiking, drinking good coffee, reading, traveling, hanging with friends and family, and at the end of the day, having cocktails with my husband.

Born in the Bronx but spent my childhood in New Jersey until we moved to Florida, where I went high school and college. Worked at the 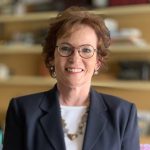 Orlando Sentinel for 3 years before moving to San Francisco in my mid-20s to work for the San Francisco Examiner then the Chronicle as a sports columnist. Loved the work! I left newspapers in 2007 after my son suffered a traumatic brain injury. I’ve written five books, including Little Girls in Pretty Boxes: The Making and Breaking of Elite Gymnasts and Figure Skating. My most recent (2020) is Intangibles: Unlocking the Science and Soul of Team Chemistry, which took me 10 years to research and write. There will be no more books!