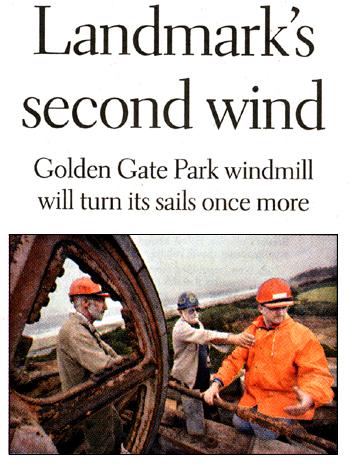 Don Propstra isn’t the first man to fall in love with the silent giant, a body rotting with decay, its lifeless arms cast aside and disintegrating into dust. “When you inside, you can almost feel the heart beating,” said Propstra, a San Francisco philanthropist who is leading the charge to restore Golden Gate Park’s 97-year-old Murphy Windmill. Someday its heart will beat again… more
>>

SAN FRANCISCO, JUNE 26, 2002 – Today marks the official kick-off of the Campaign to Save the Golden Gate Park Windmills (The Windmill Campaign), a public and private fundraising campaign spearheaded by a group of concerned citizens to restore the two windmills located at the western end of San Francisco’s Golden Gate Park. Along with the City… more >>