Vino Volo, the creators of sophisticated wine retreats found in airports across the country, hired Landis Communications, Inc. to spearhead the public relations for the opening of its first-ever urban location in the United States. While Vino Volo had successfully operated 19 locations in airports across the country, the new city location, its first outside of an airport, was an entirely new concept for the company. Vino Volo’s new city location was scheduled to open in Fall 2012 in downtown Bethesda, Maryland, a hip, upscale community just outside of Washington DC.

Landis Communications Inc. (LCI) began its work for Vino Volo approximately 6 months prior to opening. LCI’s public relations plan included creating a set of key messages around Vino Volo and specifically the new urban location, developing a press kit and conducting media training. LCI also crafted and distributed a long-lead press release. Prior to release, the agency secured an exclusive advance placement with the Washington Post announcing the upcoming arrival of Vino Volo Bethesda Row. The Washington Post (more than 9 million UMV) story, combined with a newswire release and one-on-one pitches to key media (including influential bloggers) resulted in more than three dozen advance stories and 360 newswire postings, all of which peaked public curiosity and secured strong media interest in covering the location closer to its opening date.

LCI also implemented an extensive strategy for short-lead media, which included releasing an updated press release, pitching and securing a number of interviews for Vino Volo’s top executives and local Bethesda management and pitching and securing additional stories. The crowning pre-opening achievement was securing nearly 40 local media representatives to attend the location’s preview event several days before the actual opening, and securing an official public proclamation of “Vino Volo Day” by the local county, which was presented to Vino Volo’s CEO during the preview event. LCI also worked with its PRGN partner in DC to staff the event and ensure that all media attending the event would be properly handled and have an opportunity to meet and speak with the company’s CEO. 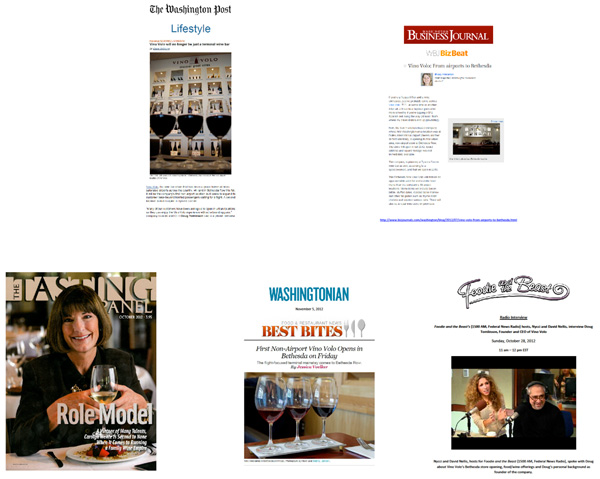 “Landis Communications exceeded our expectations in terms of press coverage of our first-ever city store in Bethesda, Maryland,” said Doug Tomlinson, CEO of Vino Volo. “From securing an advance story in the Washington Post to arranging for important local media and influentials to attend our preview event and everything in-between, they were “on it” each step of the way. I highly recommend them as an agency partner.”