Lotus Bakeries, the maker of Biscoff Cookies and Biscoff Spread sold in the U.S., wanted to greatly enhance its social media presence especially on Facebook and Twitter. The North American headquarters of the company (based in San Francisco) had done research on consumers and its recently introduced Biscoff Spread, and found that most consumers were using the spread in everyday consumption (e.g. on bagels and toast) versus using the product in recipes. The company sought to demonstrate all the many ways in which the spread could be enjoyed, while simultaneously creating more of a “sharing” community online.

The company issued its first ever “challenge” on its social media channels for consumers to show all the creative ways they enjoy the spread via an online photography contest. The final winners were selected by Biscoff’s Facebook followers, which required individuals to ‘like’ the company’s facebook page. The company also hosted a sweepstakes, during which individuals could win a variety of free Biscoff products.

Landis Communications Inc. (LCI) was engaged to drive awareness of the Biscoff Spread the Love Challenge with media, especially online media given the opportunity for click-throughs. Our goals were to 1) announce the contest, 2) encourage media coverage of the contest throughout the entire entry and voting selection period to drive activity, and 3) announce the final winners.

Following the initial announcement, LCI crafted a series of follow-up pitches that encouraged additional posts, including sharing recipe ideas for Biscoff Spread and reminding media of the deadline for the contest as it drew near. Each wave of pitches resulted in additional postings about the contest and encouraged readers to “like” the Biscoff Facebook fan page.

LCI pitched and secured more than 67 media placements on the Spread the Love Challenge promotion, including placements on About.com, the Today Show website, Pittsburg Post-Gazette, CNN iReport, My Baking Addiction, Grocery Coupon Network and more. This coverage equaled about 81,872,934 online impressions and 174,389 print impressions during the course of the campaign. Given that this was a month long promotion with time constraints, the majority of the coverage was online.

During the course of the campaign, Biscoff Cookies increased its Facebook usage from 43,000 followers to 123,000 followers and its Twitter followers from 1,500 to 3,000. Additionally, 246 individuals entered the photo contest and it is estimated that the sweepstakes had approximately 62,000 participants. 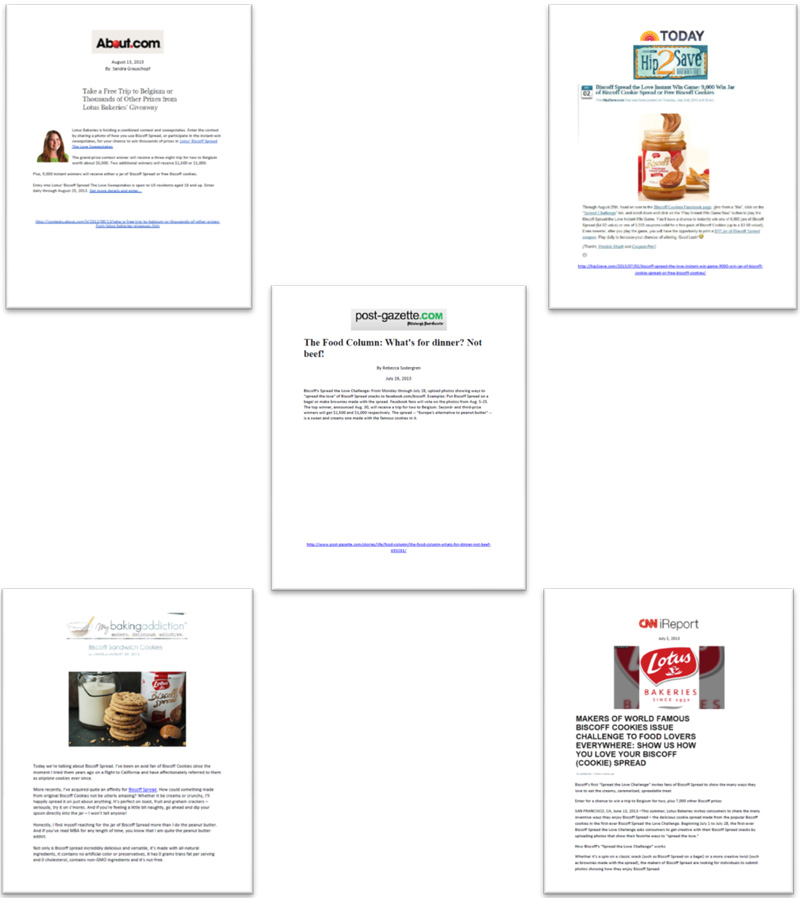