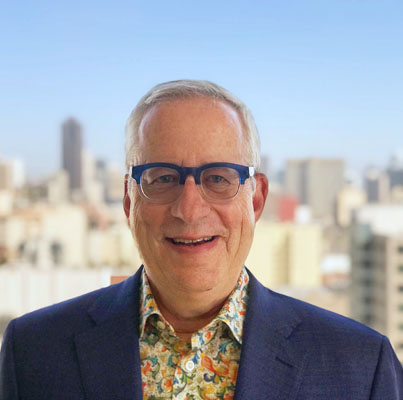 Prior to launching LCI, Mr. Landis served as PR/Community Relations Director for KPIX TV, the San Francisco CBS affiliate.  While there, he was part of a team that won the station two national Emmy Awards and a Peabody Award.  Before his work in television, Mr. Landis was PR Director of the San Francisco Symphony, where he helped open San Francisco’s Davies Symphony Hall.

In his volunteer capacities, Mr. Landis serves on the advisory boards of Project Open Hand (serving meals to people with life threatening diseases) and ODC, San Francisco’s modern dance company, theatre and school. He also serves on the board of the City’s Friends of Alta Plaza Park and has been instrumental in the formation of the neighborhood group Friends of Fern Alley in San Francisco. He is a past marketing committee member for the San Francisco Symphony, the San Francisco Ballet and SFMOMA.

Like every other PR professional, Mr. Landis studied piano in college (at Northwestern University in Chicago) and his first jobs included teaching piano to neighborhood children (at the ripe old age of 12).

Mr. Landis lives in San Francisco with his husband, Sean Dowdall (General Manager at LCI) and in his spare time enjoys music, theatre, travel, hiking, skiing, hanging out with his dogs Gaston & Alphonse and partaking in the culinary delights of San Francisco. David Landis’ best celebrity meeting ever? The one and only Stephen Sondheim.